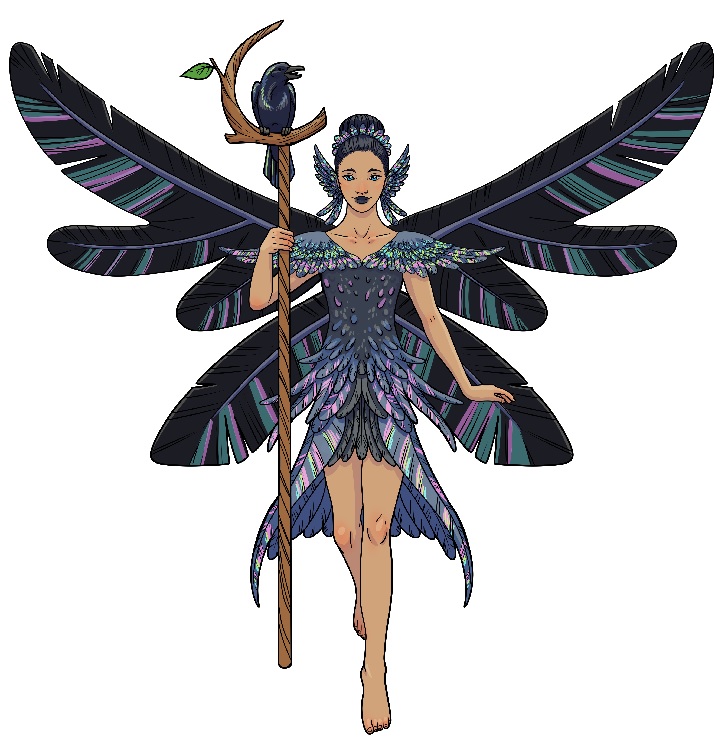 The KrähenFee team is a large organising team consisting of former organising members of KrähenCon and FeenCon.

Together we have worked on the KrähenCon in Krefeld and the FeenCon in Bonn as well as on numerous other conventions, such as the DreieichCon, RatCon, etc..

While in the last few years the events could unfortunately only take place online, the opportunity has arisen to hold a future 'real' event at Burg Linn in Krefeld, which we will organise under the name KrähenFee together with the 'Festival der Phantasie'.

The first KrähenFee was on 07 and 08 August 2021 again unfortunately only an online convention, from 2022 we will hopefully meet at Burg Linn.

The KrähenCon is part of the now 21 year long Krefelder Con history.
1995-1997 the history began with the Convention of the Seidenraupen AG, set up by the founders of the GfR e.V. At that time the convention was still held in the old municipal library until new fire regulations prohibited this.
From 2004 - 2006 the AG Seidenraupen organised the CoCoon in the Freizeitzentrum Süd.
From 2007 onwards, the KrähenNetz team, which had come together especially for this purpose, organised the KrähenCon.
In 2015 the KrähenCon moved to Raphelsheim.
In 2020 thanks to the pandemic, the convention moved to the internet as an online convention.
In 2021 the KrähenCon was then held together with the FeenCon under the name KrähenFee.
In 2022 the first KrähenFee took place as a presence event together with the Festival of Fantasy at Burg Linn in Krefeld.

The FeenCon can also look back on a 31-year history.
In 1990 it was organised for the first time by GFR and several German role-playing companies under the name PhanCon in the Stadthalle Ratingen.
Since 1992 the convention moved to the Stadthalle Bonn-Bad Godesberg due to space problems. The following year, the name was changed to FeenCon, as GFR became the sole organiser. In the meantime, FeenCon was held twice in Herne at the turn of the millennium. The Stadthalle Bonn-Bad Godesberg hosted FeenCon for the last time in 2019.
In 2020 due to the global pandemic, the convention took place as FeenConline online only.
In 2021 FeenCon was then held together with KrähenCon under the name KrähenFee.
In 2022 the FeenCon was again organised by GFR e.V. under new management and moved to a new building, the IGS Bonn-Beul.

In 2021, the idealistic cooperation between the helpers and organisers of the two cons resulted in the KrähenFee, with the aim of organising a joint fantastic convention on an imaginative site, which will take place regularly at the Linn Castle in Krefeld.
For this purpose, a new association, the 'KrähenFee e.V', was founded at the beginning of 2022.

At the KrähenFee we offer artists, publishers and traders an opportunity to present themselves in a fantastic ambience.
Players and visitors will be introduced to the most diverse areas of our hobby, be it game rounds, tournaments or readings, there will be something for everyone. We are looking forward to your visit.